Biblical book Exodus which has been written sometime around 1450 BC tells the story of Aaron’s breastplate (Aaron was high priest of the Israelites). According to Exodus, God designed a breastplate for Aaron, and Moses, his brother made this breastplate. Hoshen which is Hebrew name for the breastplate was adorned with twelve gemstones representing the twelve founding sons and twelve tribe of Israel. The breastplate includes four rows of with three gemstone in each row: 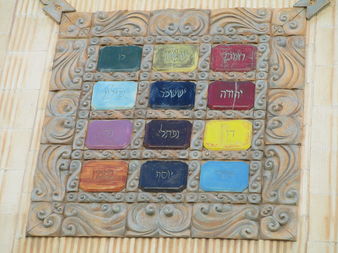 High Priest's breastplate
And you shall make a breastplate of judgment, in skilled work; like the work of the ephod you shall make it; of gold, blue and purple and scarlet stuff, and fine twined linen shall you make it. It shall be square and double, a span its length and a span its breadth. And you shall set in it four rows of stones. A row of sar­dius, topaz, and carbuncle shall be the first row; and the second row an emer­ald, a sapphire, and a diamond; and the third row a ligure, an agate, and an amethyst; and the fourth row a beryl, an onyx, and a jasper; they shall be set in gold filigree. There shall be twelve stones with their names according to the names of the sons of Israel; they shall be like signets, each engraved with its name, for the twelve tribes. (Exodus 28:15-21)
It is worth noting that above is the King James translation version of the bible. Other versions give slightly different translations of the gemstones used in the breastplate. Other versions include: 1) Septuagint Version, the Greek translation which was made at Alexandria in the early half of the third century B.C.; 2) the Vulgate Version 3) Jewish Wars version, written originally in Hebrew about A.D. 75, shortly after the destruction of Jerusalem, 4) Jewish Antiquities, written in Greek about A.D. 93.
Following table shows the gemstones and their position on the breastplate as described in the five versions:

In the first century AD, European Christians added their own interpretation of Christianity to New Testament. In the book of the Revelation, John (the author of Revelation) has written about twelve gemstones called “foundation stones”. These gemstones are similar to the gemstones of breastplate in Exodus. The only difference is each gemstone in the book of Revelation represent an apostle (each of the twelve chief disciples of Jesus Christ) rather than a son of Jerusalem. It should be noted that Revelation does not tell us what gemstone belong to what apostle. This lack of explanation in the book of Revelation has open a never ending debate between the Christian scholars.
The wall of the city had twelve foundations, and on them twelve names of the twelve Apostles of the Lamb. . . . The foundation of the city's wall were adorned with all kinds of precious stones. The first foundation was jasper; the second, sap­phire; the third, chalcedony; the fourth, emerald; the fifth, sardonyx; the sixth, sar­dius; the seventh, chrysolite; the eighth, beryl; the ninth, topaz; the tenth, chryso­prasus; the eleventh, jacinth, and the twelfth, amethyst. (Revelation 21:14,19)
References:
1- G. F. Herbert Smith, Gemstones, Methuen & CO LTD, 1958.
2- Lance Grande, and Allison Augustyn, Gems and gemstones timeless natural beauty of the mineral world, The University of Chicago Press, 2009.